The autumn split of League Championship Denmark has started and we at Copenhagen Flames are excited to be part of the action.

Our first match is tomorrow, Tuesday August 14th, against Hobro Vikings and the team is working hard to get ready for their debut. We asked Director of Esports, Daniel Vorborg, to share his thoughts on the upcoming match and our brand-new roster.

It’s no secret that I’m extremely excited to get started – I’ve personally worked a lot with League of Legends, and it’s fantastic that we now have a team at Copenhagen Flames.

We had to complete our roster relatively quickly but I’m very satisfied with the final result. I feel like every single one of our players can be the best in their respective roles in LCD. We also have a good mix of experienced players like Kektz, Grisen and Styllee while also getting new blood from Raxon and Christian Jensen. We’ve had a relatively short time to prepare for the season but we’re still counting on starting out strong and just getting better and better as the season progresses. 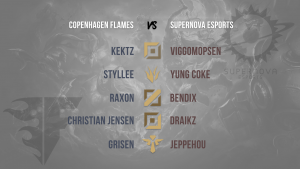 Most teams in LCD seems to have upped their game in comparison to last season and I think the competition will be on a substantially higher level. With that said, our goal is clear. We want to win it all, and that is of course also applicable to tomorrow’s match against Hobro Vikings. They have a solid line-up and prefer to play for their ADC “Draikz” – but we should be able to shut that down. Player-for-player we simply have more firepower and even though we might not be completely cohesive as a team yet, we still count on a Flames victory tomorrow.

Don’t forget to tune in tomorrow for the boys’ debut!

WHO – Copenhagen Flames VS Hobro Vikings