We had a rough day yesterday in our match against Bucks Vipers, and our play did not live up to our own expectations. Our individual play was not up to the level it needs to be, and our team play suffered from our two bot lane players dealing with sickness, which meant they couldn’t fill their usual roles within our team communication. However, we pulled through, and that shows quality – that even on our worst days, we have the level of play to pull out the 2-0 victory.

In the first game, we went into the draft with a mindset, that if we could prevent the game from being solo queue-esque, we should be able to secure ourselves a win. That’s why we targeted champions like LeBlanc and Katarina, but Buck’s Vipers surprised us with picking up the Akali. Their composition had a ton of engage, and two snowball carries – while we had a great scaling. So going into the game, we wanted a slow and steady game, scaling into our power spikes. However we completely failed to make that happen for ourselves, and due to some mechanical misplays and poor coordination, we allowed especially the Akali to get ahead. But while we were down 2-9 in kills and 1-3 in tower, 13 minutes into the game, we never fell behind by more than 1.7K gold. This was largely due to the fact that Kektz, Styllee and Raxon kept a CS lead on their counterparts throughout it all. 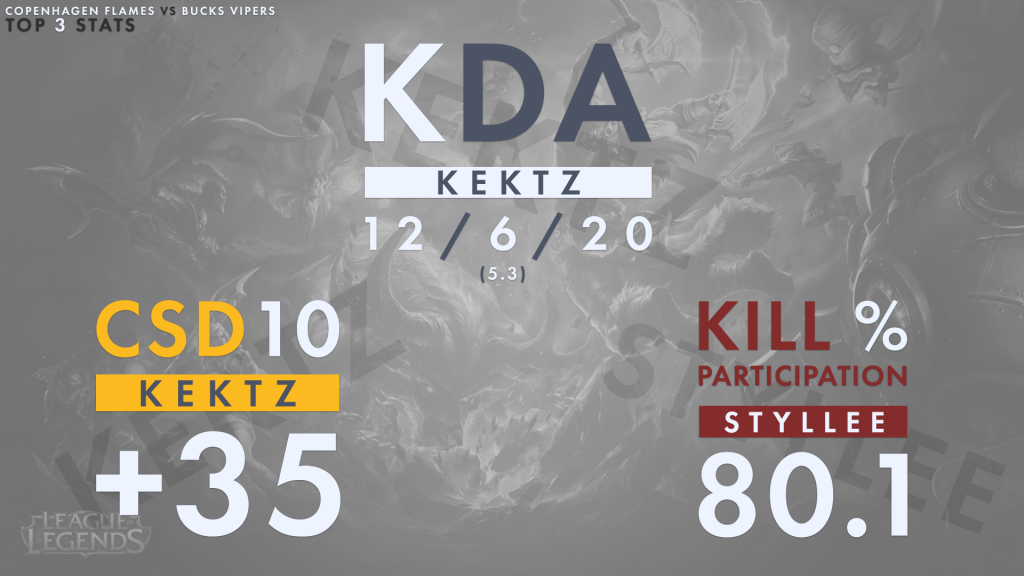 Then it all turned around in our favor, when Bucks Vipers attempted to chase down kills around our mid inner turret, with a teleport from Kektz and a flank from Styllee, we took a fight 3 for 0, and on the backside of the fight we knocked down another turret. Suddenly we were up 1.8K gold, with just a single play. From then on we moved around the map as a unit, avoiding small skirmishes, as Akali and Lucian shine in those. And we kept Buck’s Vipers from getting a single kill, for almost 10 minutes. We did have a hiccup around 23 minutes in to the game, but otherwise it was smooth sailing, and we finished the game just before the 30 minute mark

Heading into game two, we ended up with a carry matchup in the toplane. Kektz picked his Camille into Eloguden’s Kled. The matchup swung in Kektz favor very early, as Kled teleported into the botlane before the 4 minute mark without getting anything in return. Another important aspect of the early game plan was to not let Olaf snowball, as he falls off really hard without a lead. We were also quite successful in that department, as Kektz got our first kill on the Olaf, and 14 minutes into the game we had the Olaf at a 0-3 score.

Generally we took a slight lead on the map in the early game, and with a composition that had Camille, Ryze and Ezreal, we were not afraid to scale a bit into the game, so we just took it slow and steady.

We had constant pressure from Kektz in the side lane, but throughout the game we did not make the most of it. So while we kept getting small advantages, we failed to respect Buck’s Vipers targeting us out as we split for the 1-3-1. That resulted in more deaths than necessary and another game that wasn’t as clean as we could have hoped.

Nonetheless we were never really in a position where we didn’t have control over the game, and we were able to finish the game after 31 minutes.

Scrims have been looking good lately, and we expect to show up way stronger next week versus Horsens Esport.

WHO: VS Horsens Esport