To support the growing needs of our Counter-Strike roster as we aim to stay in the top 15 – we are amping up the setup around the team.

For the 2022 season, we have rethought our coaching setup. Director of Esport, Daniel Vorborg, will take on the role as Head Coach of the team, while we also welcome Magnus “fr0slev” Frøslev assistant coach. Furthermore the team is looking to hire one more assistant coach to to support the team in achieving their goals in 2022.

To explain the reasoning behind the setup, Daniel Vorborg explains:

“We had a lot of conversations with the team regarding what we need around them to provide the optimal resources. One of the biggest priorities was to get someone that could continuously push the players to be their best selves and hold the team accountable to our standards. On top of that; we’re also heading into a very important period for the team. The end of last year was extremely tumultuous, with sub-optimal results. We need to prove ourselves again right off the bat this season, and developing new working relations with a new head coach can take time. The team has already had two different coaches in djL and pita in less than a year, and also periods of time with no coach at all. As such we are now heavily prioritizing consistency

This means that I will be the Head Coach of the team; stepping down from a lot of my other responsibilities in Copenhagen Flames in order to focus my energy on making our team perform to the best of their ability. I’ve already been there for almost every practice day and every official match the team has ever played. So from the get go; I know the players incredibly well – both on and off the server. 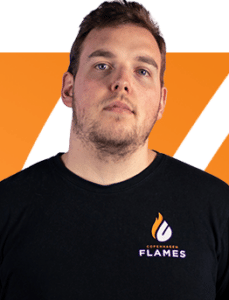 To assist the team, we want to build a coaching setup around the team with two assistant coaches as well. We’ve hired Magnus and he is already making a big difference for the team. The plan with the assistant coaches is to make evaluations as efficient as possible – both on a team and individual scale. We’ve developed a new system for our evaluations and we can already see the difference it makes in our progress and can’t wait to reap the full rewards when we’ve hired our next assistant coach.

We’ve had a fantastic start to the year in practice and we are looking very much forward to showcasing this in official matches. Thanks to everyone who continues to support us, even after the rocky ending to last season. I’m sure we will make you proud in 2022!”